I have many opinions …

It’s pretty obvious that the Republican party is going to try to paint Democratic candidates for US Federal offices (President, Senate, and House) as wimps who are going to hand the country over to “terrorists”.

That, of course, is utter and vacuous nonsense.

Are we Citizens or Subjects?

The Democrats allow us, you and me, to have opinions, to differ from one another, and to disagree with the government. In other words, we would be citizens.

The Republican position, on the other hand, tries to make you and me subordinate to the government position. The Republicans want us to be subjects. If we differ on any subject from their position - whether it be on a war, on use of taxes to support “faith”, or on whether the government hand is put down our wife’s throat or down our pants - then we will be labelled as unpatriotic and un-American.

I chose to be a Citizen. I hope you join me.

I’m getting pretty disgusted with the way that Congress does the dance of the neutered wimps around the president’s increasingly egregious claims of executive power.

GWB is playing a game of chicken with Congress and Congress ought to call his bluff.

The House and Senate ought to begin by sanctioning those government contractors who refuse to turn over documents because the president told them not to. Perhaps the Senate ought to begin by holding some executives from Blackwater and AT&T in contempt and tossing ‘em into the clink until they recognize that Congress has at least as much authority in this country as does the president.

And Congress, even if it does not have the votes to pass veto proof legislation or to get past the Senate’s filibuster rules, most certainly has the power to refuse to pass legislation that the president needs.

Teddy Roosevelt once sent a fleet across the seas and said that it was Congress’ problem to pay to get it back home. Perhaps Congress ought turn the tables and refuse to pass the forthcoming budget, let the Federal government go into stasis, and tell the president that it’s his problem to pay for his war.

I just got a new toy - We just added solar panels to our house.

Every hour or every time the sun changes I dash up to the garage to check the output and then race out to the power meter to watch it spin backwards.

It is somewhat ironic that as a result we are going to have to trim the crowns of several trees that impinge on our solar horizon.

We anticipate that this will reduce our electrical bill to zero.

However, due to a Reagan era clunker in the the Byzantine US tax code, we are going to be scrod and unable to obtain the Federal Tax credit.

Mr. President, I offer you a toast.

May you have a long life; may your mind remain lucid.

My you live to understand how you perverted your oath to preserve, protect, and defend the Constitution of the United States.

May you live to perceive how you polluted the words “freedom” and “democracy” and so dishonored the United States and its citizens that we are ashamed to say “We are Americans”.

May you live to comprehend that you cheapened religion, morality, and ethics by turning them into political tools of expediency rather than reflections of our highest aspirations.

May you live to feel shame for what you have done.

I’ve been rather busy of late; I’ve been writing a lot of code in pursuit of my long developing ideas about self-healing networks and network troubleshooting (these may seem disjoint, but they are two ends of a spectrum.) 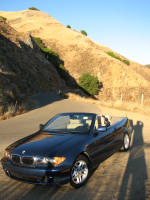 I needed a break, so this last weekend I fired up Doda, dropped her top, and headed south for a trip over the Santa Lucia mountains, from King City to Big Sur via the Nacimiento-Ferguson Road.

The trip encompassed landscapes covered by two of California’s greatest writers - Wallace Stegner and John Steinbeck. (All married people ought to read Stegner’s Angle of Repose and Crossing To Safety.)